I stopped full-time work in January and was looking forward to daily swims at Park Road in its open-air swimming pool – the ‘lido’ – Olympic-sized and landscaped. Though heated, its ancient system often creaked; I have swum in 17 degrees on cold summer days. But there it was, every Summer.

In 2014 the new owners of this complex began an ambitious – and needed – refurbishment. They foolishly started lido works just before its traditional summer season. Closure then ran on and on, leaving outdoor swimmers either bereft or forced to use the (overheated) indoor pool half its size. I hate steamy, noisy indoor swimming but knew it was that or nothing. This compromise lasted until 12 September, when the indoor pool closed for its own upgrade. I gave up swimming in despair, hoping for a better 2015. Then the miracle: on 26 October the lido re-opened and we are promised it until indoor refurbishments are complete (target date January 2015).

At first the heating of the water had a limited impact. Swimming in 17 or 18 degrees is possible of course: hardy year-round swimmers keep going at much lower temperatures. But at that level swimming is slow and pleasure limited. It feels more like mere exercise. (I intend this phrase as an insult. The three physical exertions in my life – habitually fast walking, cycling, and outdoor swimming – are all aesthetic pursuits. If they make me fitter or slimmer, so much the better but my motive is outdoor enjoyment.) However in the second week of re-opening the water temperature began to climb, just as the air temperature began to fall. It now hovers around 20 degrees. As the sunny but chilly mid-November mornings began I saw what in a quarter of a century of lido swimming I had never seen: steam rising from the pool. 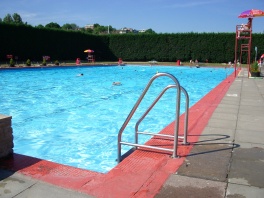 In her 1983 novel The Philosopher’s Pupil Iris Murdoch imagines an English town whose inhabitants are bonded by their common experience of outdoor swimming. Ennistone is a spa with warm springs feeding its Outdoor Bath (’said to be the largest outdoor swimming pool in Europe’) to 26-28 degrees all the year round. ‘Everybody swims’ from six-week babies to the aged who ‘swim, unashamed of their bodies, pot-bellied men and ancient wrinkled women’. These real swimmers are sniffy about the indoor bathers who use much hotter water. Because swimming is universal, the skins of Ennistone citizens have a perpetual healthy sheen.

Here in Hornsey we are near to two year-round open air swimming resources. Parliament Hill (on Hampstead Heath) boasts a huge lido utterly unheated. I revere its hardy regulars who will break ice to get into it for their daily watery fix. I can only admire the Winter patrons of the Highgate Ponds elsewhere on the Heath where I once swam in waters I subsequently found were 14 degrees. I haven’t been back.

In Hornsey our newly-available warm swimming water is engineered and hasn’t the fame of the Heath’s resources. But people are responding to the unfamiliar boon of outdoor winter swimming without the pain. True there are those who must thrash madly up and down but our spacious lido can accommodate them as well as those who insist, quite unnecessarily, on wearing wet suits. For the rest of us this aquatic heaven is a place for rhythmic movement, without pain, effortless and weightless under a blue November sky. We are the Chosen Ones who like Murdoch’s Outdoor Bathers can feel superior to the faint-hearts for whom it is indoor heated or nothing.